Beyond the Nest Reviews Geva's THE NICETIES 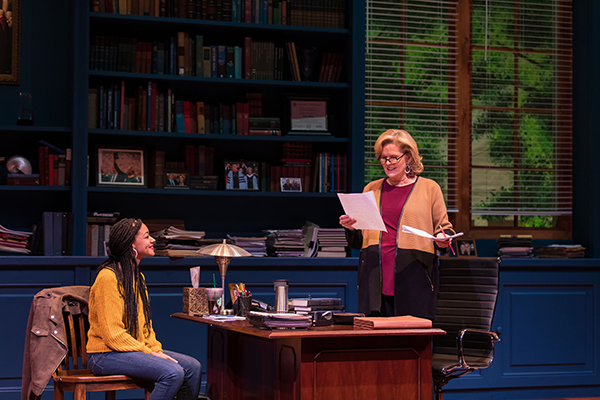 The Niceties, written by Eleanor Burgess, is a complex, sophisticated play that so accurately reflects what is happening in today’s society, it is uncanny.

When student Zoe Reed visits her history professor Janine Bosko, to discuss a paper in which she proposes an unorthodox view of the role of slavery during the Revolutionary War, what starts as a “nice,” civil discussion between the two turns into a sparring match, where the gloves come off, with verbal, emotional, and even a symbolic physical knockdown.

Although it was written prior to the 2016 election, based on an incident that sparked conflict on campuses across the nation, it is perhaps even more timely today. Discussions between the two women  wander through a thorny landscape strewn with racism, minority oppression, civil rights, feminism, LGBTQ persecution, patriarchy, issues of colonization, white privilege, politics, and, yes, even history.

As an audience, we see the two have more in common than they suspect. Yet, because each is unwilling to listen or to try to empathize with the other, and is more interested in landing their verbal and intellectual punches, neither can win. They cannot see that the other has a right to hold her opinion, or even come to an agreement to disagree.

As Zoe Reed, Cindy De La Cruz is a powerhouse. Initially, she comes across as a likable, ultra-bright student, involved in activist marches while pursuing a poli-sci degree. As she feels increasingly belittled and undermined by her professor, her more radical side emerges. We see a young woman convinced that the only solution for the downtrodden is to tear down the social system, rather than try to change it from within. Zoe's transformation is as convincing as it is seamless.

Jordan Baker endows Janine Bosko with a sense of unerring self-confidence, born of intellect, privilege, and fighting for rights within the system. From her comfortable throne in the academic tower, she makes proclamations and edicts — sometimes with racially and socially insensitive overtones — that land her in hot water when Zoe disseminates them via social media. With her career on the line and Zoe’s life threatened, Janine does an about-face, and invites Zoe to collaborate on a joint statement to end the strife. Yet the two cannot even agree on what the statement should include.

We discover that Janine, too, lives “on the fringe” of mainstream society, and although the two have much in common, they clutch firmly to opposite sides of the same wall. The discord they experience is a poignant reminder of an all-too-famiilar problem in today's divisive world.

Ms. Burgess’ writing is smart and artful. Her characters are richly articulate, and she has done an incredible amount of research for her characters to spar so deftly on such a multitude of topics.

Director Nicole A. Watson is interested in plays that “…interrogate history and amplify the narratives of those who have been ignored or misrepresented.” In this play, she is richly at home. She brings the story to life in a way that is thoughtful and bold.

The Niceties is one of the most profoundly thought-provoking plays you’ll ever see. It demands emotional involvement. It is raw, it washes over you in waves, and it is simply brilliant.

The Niceties can be seen on the Wilson Stage at Geva Theatre Center through November 17. Click here for tickets and further information.