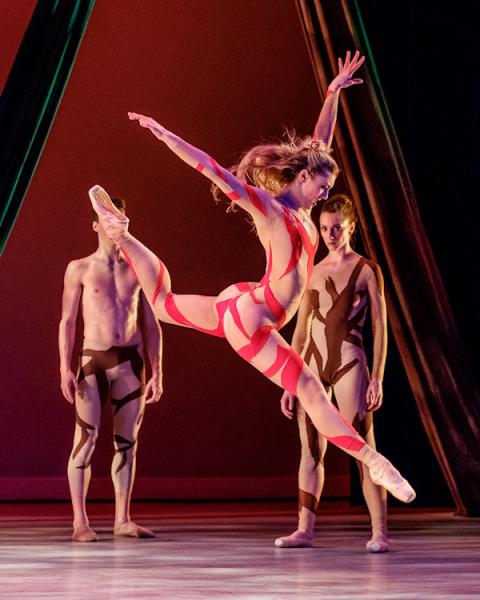 Stravinsky’s Rite of Spring, juxtaposed with a medley of Bowie songs, would be considered very strange bedfellows for most ballet companies. For Rochester City Ballet, it is a novel way to showcase the versatility of Artistic Director David Palmer as well as that of the company for which he choreographs.

When Igor Stravinsky’s Rite of Spring was first performed by Sergei Diaghilev's Ballets Russes company in 1913, the avant-garde music, bursting with experimental tonality, unusual meter, and startling dissonance, sent the audience into shock…and practically a riot.  Today, more than 100 years later, it is still recognized as progressive and ground-breaking.

In a collaboration between Davis Palmer and Yanis Pikieris (Palmer’s former partner in Miami-based Maximum Dance Company), we find a performance that uses the original ballet as a springboard.  No aboriginal costumes or elderly sages here. This ballet reflects the primal vision of the two choreographers and leverages the athleticism of RCB’s dancers.

Innovative costuming and lighting, plus an elegant minimalist backdrop, take us to an ancient forest grove where the arrival of spring is heralded by celebration and ritual. Mystical maidens and virile young men invoke the season of rebirth through a series of dances that range from spiritual supplication to sensual celebration. The flow of life pulsates through the dancers, whether holding extended lines that undulate into impossible poses, exploding onto the stage en masse in tribal frenzy, or striking angular, staccato poses in response to Stravinsky’s bold, intense, hammering work.

The climax builds as the maidens circle in and out of line, and one is ultimately selected as the sacrificial “Chosen One,” then led off to be prepared for the fate of dancing to her death. As the Chosen One, Megan Kamler is mesmerizing.  A blank, trance-like look provides counterpoint to the power of her gravity-defying leaps and stunning performance until, in one grand crescendo, she lands in a heap on the ground in this awe-inspiring work.

Across David Bowie’s 50-year career, we see a master of reinvention and innovation. David Palmer’s Under the Moonlight shows the influence the singer had on this dancer/choreographer, as he chooses ten Bowie pieces spanning almost twenty years of the singer’s life. The breadth of selections for the tribute provides the perfect palette for a choreographer and company with this level of talent. 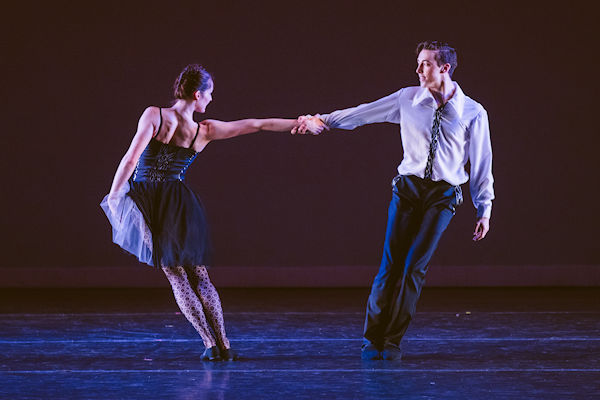 The variety of music invites a jive pose here, a nod to Fosse there, a Bowie posture elsewhere, but overall, the choreography is pure Palmer. The series is alternately filled with joy, brooding with decadence, or simmering with sensuality, depending on the music. Power-filled leaps that hang mid-air, elegant lines, intricate body angles, and liquid transitions are commonplace, no matter how challenging the choreography. These are all pieces I could watch over and over.

The strength and finesse audiences have come to know from Adam Kittelberger were put front and center in a solo of “Golden Years” as David Palmer choreographed it specifically for his “swan song” as he leaves to pursue other adventures. Kittelberger will be much-missed.

After the Company finished with “Let’s Dance” to a standing ovation, and my husband and I were leaving the theater, he turned to me and commented, “I could have watched them all night, but I doubt they could have kept it up as long as I could have watched. . . .”

I have a feeling he just might be wrong about that.

Top photo, right with Megan Kamler as the Chosen One, by Erich Camping

Square featured photo with the full company and Megan Kamler as the Chosen One, by Tom Rodriquez